Don't have an account? You'll need one to register for courses, purchase publications and view members-only resources.

If you have tried resetting your password and are still having trouble, please contact The Clearing House support team at 800-875-2242, extension 3. 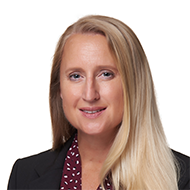 Debbie Barr has been with Nacha since 1994 and joined the ACH Network Rules Department in 1996. Debbie administers the Nacha Rulemaking Process, works directly with the Rules & Operations Committee, fulfills the role of NACHA’s ACH Operators Relationship Manager, acts as the Rules liaison to the Payments Associations, works closely with NACHA’s Education and Communication Departments to promote implementation of new Rules, manages ACH Network research and data, and serves as a team member on Industry Verticals.

Before coming to Nacha, Debbie spent time working with Renaissance, a private/government partnership focusing on tourism and economic development. Debbie holds a BA in Business Administration with a concentration in Marketing from Shenandoah University.